​NOTICE FACE MASKS MUST BE WORN ON  PREMISES AT ALL TIMES AND  SOCIAL DISTANCING  OF  AT LEAST 9 FT MAINTAINED.

2021 Sale Horses
​We have some great horses available, please call for appointment 413-786-1744. Please fill out the Horse Inquiry form (below and on contact page) and include your contact information and what you are looking for. 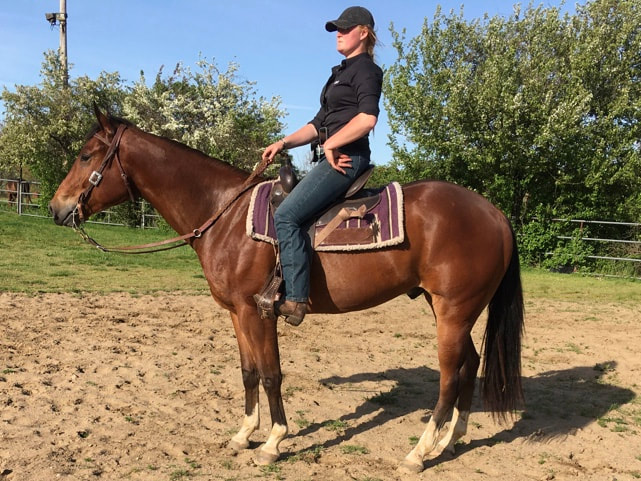 Red Song Joe - 2018 Bay AQHA Gelding Pending sale
(Two Eyed Red Joe X Classic Red Song) "Joe" is a double bred Pitzer gelding that stands 16 hands. Strong made, very attractive, and gentle. Nice head horse or lead pony prospect. Super sweet gelding loves attention and being groomed. He can really go in any direction be it in Western riding or into a hunter type. 33
​Smoke is a 14.2 hand grade 10 year old Quarter Horse mare. She is catty and well educated. This mare will take someone far in a show pen or make one glorified trail partner. Smoke is kind and willing. She does everything you'd expect a broke horse to do. Lead load tie bathe stands for vet and farrier. Neck rein, leg yield, lead change, DEEP stop, moves off weight, vocal commands are prominent in her training. This mare just completed 30 days reining training. She has been hauled all over the states with out any complications. Smoke has been roped on in the box and in the pasture. She rides English and western. Smoke jumps as well! This is the IDEAL ALL AROUND mare!  ohs14
Time Out Dulce - AQHA SOLD
​Snickers is a registered 10 year old sorrel gelding that stands 14.3 hh tall and is a finished cutter. Snickers is the real deal when you want a cow horse. We used him for everything under the sun here around the farm from catching wild cattle, roping and doctoring cattle, to using him in ranch rodeos and sortings. A real ranch gelding that's laid back, one hand broke, and one that will lope out of his tracks from a dead stop. Extremely nice gelding.  ohs15
​Drifters Buck-AQHA
2015 Dun Gelding - ​(Two Bucks Or Moore X Drifters Patti) This gelding was broke as a 2 year old and never bucked. He is used gathering cattle daily, is quiet in the box, and has had over 100 calves tied down on him in the arena. He's Pitzer bred top to bottom and it shows!
SS Duece of Diamonds - ApHC
​SOLD
2012 Dun/White Gelding - This is a big gelding with lots of personality about him. He loves attention and will give it his all to please his rider. He is very gentle and has been ridden lots outside as well as in the arena. He trail rides great and has been used numerous times penning and sorting cattle. We have also used him to pony colts around the farm. Sells sound. Sired by a son of the World Champion, The Diamond Finder, and out of a daughter of the Multiple World & National Champion Stallion, Twenty Twenty Vision. 35
RH Cashin Chexs - AQHA-SOLD
"Sherri" is a beautiful black 6yr old mare. Standing around 15.1hh with a great build, she is an eye catcher! She has a GREAT foundation and handle. Works extremely well off your legs, well rounded, and would excel in any discipline. She lopes nice circles and trail rides alone or with a group. Throw a rope off of her, sort cows, open gates! If that's not your style, with a little training, you could take her to jump in the morning, then hit the flat, and finish the day with games. This mare stands like a dream for the farrier, loves to be groomed and bathed, and hauls & loads like a champ. Sweet and easy to be around. 31
LC Sky Chex-AQHA -SOLD
2017 Palomino Gelding - (Hairpin Blue Chex X Circle Bar Blue Sky) This flashy gelding is the ideal all-around ranch horse. He's been used for day-work on feed lots and ranches, sorted over 100 bulls through a sale in one day, and competed very successfully in ranch rodeos as well as AQHA and ARHA versatility ranch horse shows. Whether you need to rope a cow, pony a horse, or flag a colt in the round pen, he can literally do it all. He will ride in a hackamore, snaffle bit, or a finished bridle bit. This horse will not disappoint and he will go all day. Whatever you need, "Pi" is your guy.
Oakies Travelin Jonez - AQHA-SOLD
​2017 Bay Gelding  (Travelin Jonez X Okies Lil Screen) The total package! Sporty, athletic, shapey, and drop dead gorgeous with the pedigree to boot! Just 4 years old but broker than most 15 year olds. "Scooter" is an own son of the great Travelin Jonez who has won almost $200,000 in the Working Cow Horse. This gelding is one of the nicest horses I've ever swung a leg over. He is so talented and extremely versatile. He has been used on a feed lot, he's very broke in the arena, and has lots of outside miles. This horse has been started in the working cow horse and could make a great derby horse for someone who wants to show. He'll pack the bridle, lope nice circles, swap leads, stop hard, and turn around. He's very cowy and quick footed. He has been roped off of and used at ranch rodeos. If you want something to start in the box and make a knockout heel or calf horse out of, you won't find a better one than him. Sorters and team penners take a look too, all the work is done, all you have to do is go enter on and him and collect the checks he wins for you. If none of this fits the description for what you want to do and you just want a good trail horse, he would work for that as well. No limitations with this guy, he is just so dang cool. Stands 14.3 and sells 100% sound with no previous health problem or injuries. 39 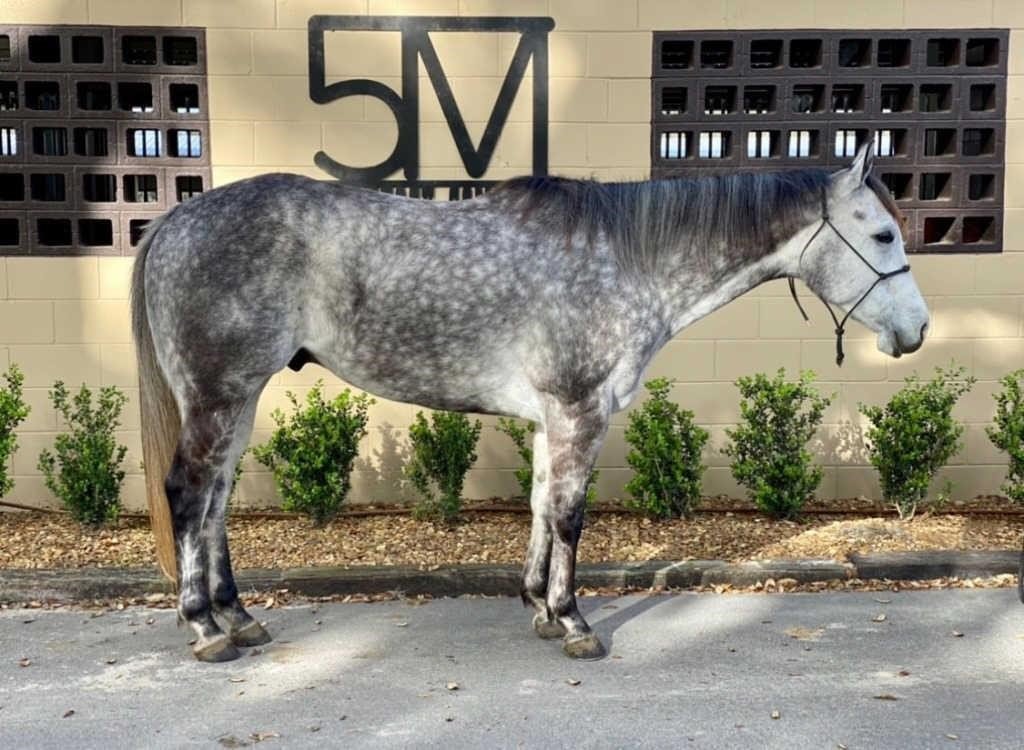 KC Awinner Dont Quit - AQHA-SOLD
​2016 Gray Gelding (Heza Fast Dash X Eyes Of A Woman) Cash is a royally bred 5 yr old gray gelding. Greats like Dash For Cash, Mr Jess Perry, Jet Deck, and Beduino fill his pedigree. He is Louisiana bred with 4 starts on the track, 1 win, AQHA race ROM, si90, and nearly $7000 in earnings. Cash has had 6 months of professional training on the head side and is suitable for any level rider. Continue his rope horse career, turn him into a ranch type horse and go to the horse show, or put a pattern on him. The possibilities are endless for this talented young horse. 42
Choctaws Bingo - ApHC
2015 Leopard Gelding -"Happy" is a registered 2015 model leopard gelding standing 15hh tall. I've owned Happy for the past 3 years during which I have done everything under the sun on him. He is the most personable horse you'll ever come across or could want. You can catch him anywhere that he stands without issues, whether he is stalled or out in open pastures. He loves attention and is so very willing to please. He stands quietly to be tacked up and mounted or you can ride him bareback. We've used him to sort, pen, and push cattle. Happy will let you pop the bull whip as well as shoot a gun off of him while being ridden. He's honest enough that we've done a day's work on him which consisted of roping and catching cattle but still he's gentle and easy going enough that he's been ridden in all of our local parades. He balks at nothing he's asked to do and will go absolutely anywhere you point him. He crosses the water, logs, & bridges and he's traffic safe. Great to bathe, loads & unloads super, stands for the farrier. There's no buck or silliness about him at all and he's the same ride every time. I feel he would be suitable for any level rider. 58 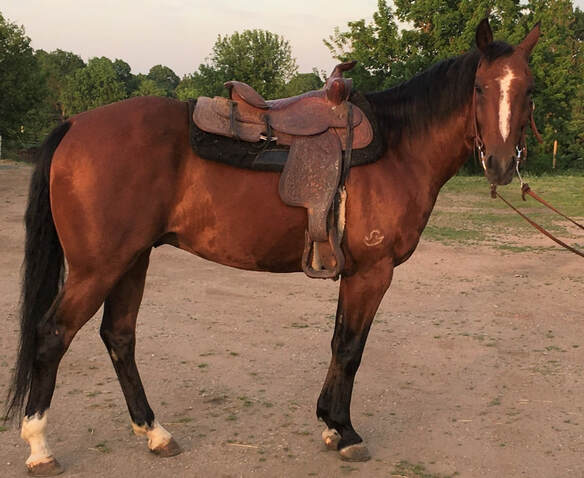 OSR Hickorys Nu Cash - We rode him in the field, round pen, and out on the trail. Come see this pretty gelding, he is very athletic! 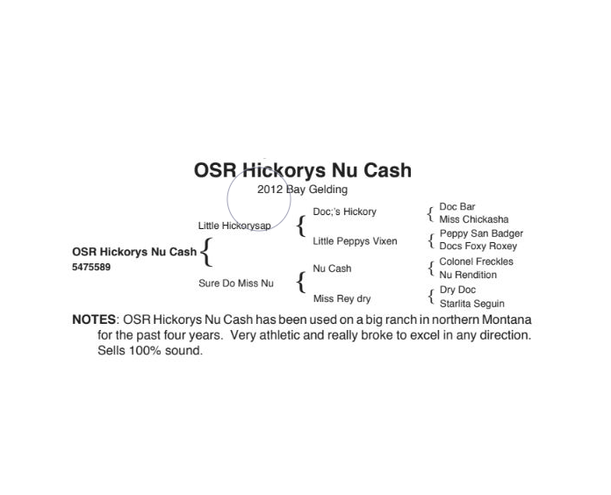 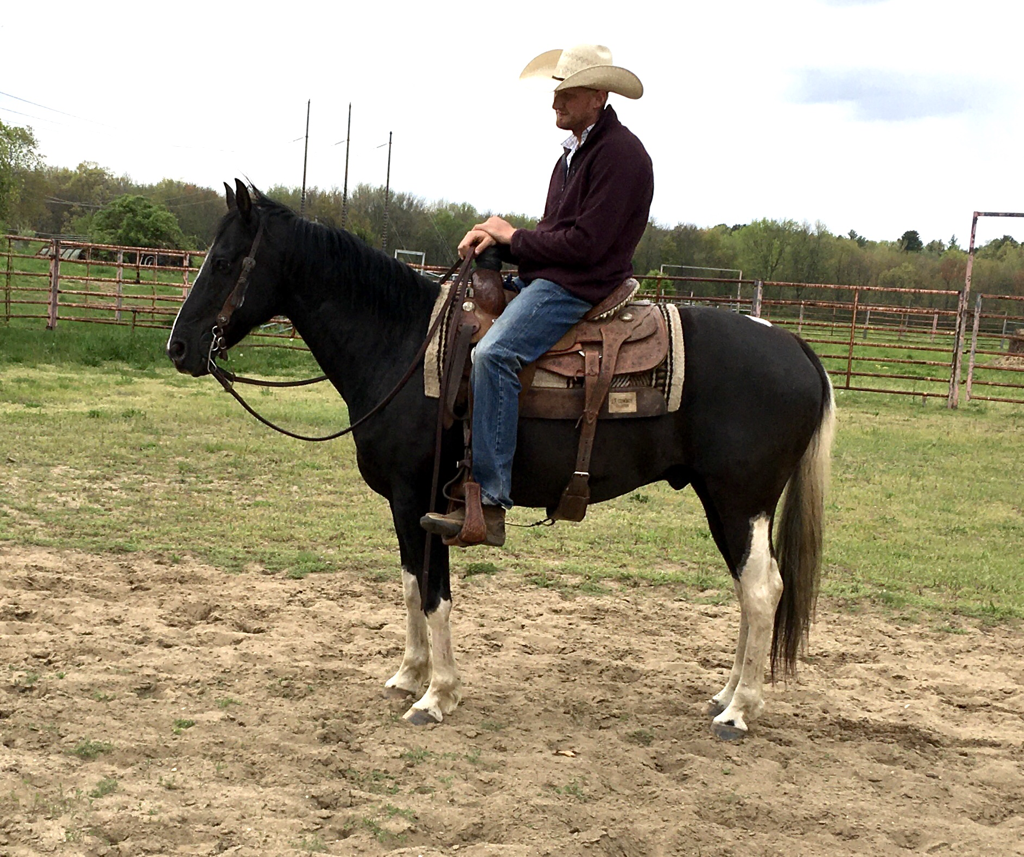 Mr. Patch To You- this pretty grade black paint gelding stands about 14.3hands looks to be gaited also. He will ride all day. We trail ride him as lead horse, solo ride him all around too. He is a fun horse to ride. He is forward strong so not a beginner rider horse. Intermediate walk, trot, canter would get along well with him. He will do gates, donkeys, ring, trails and more. 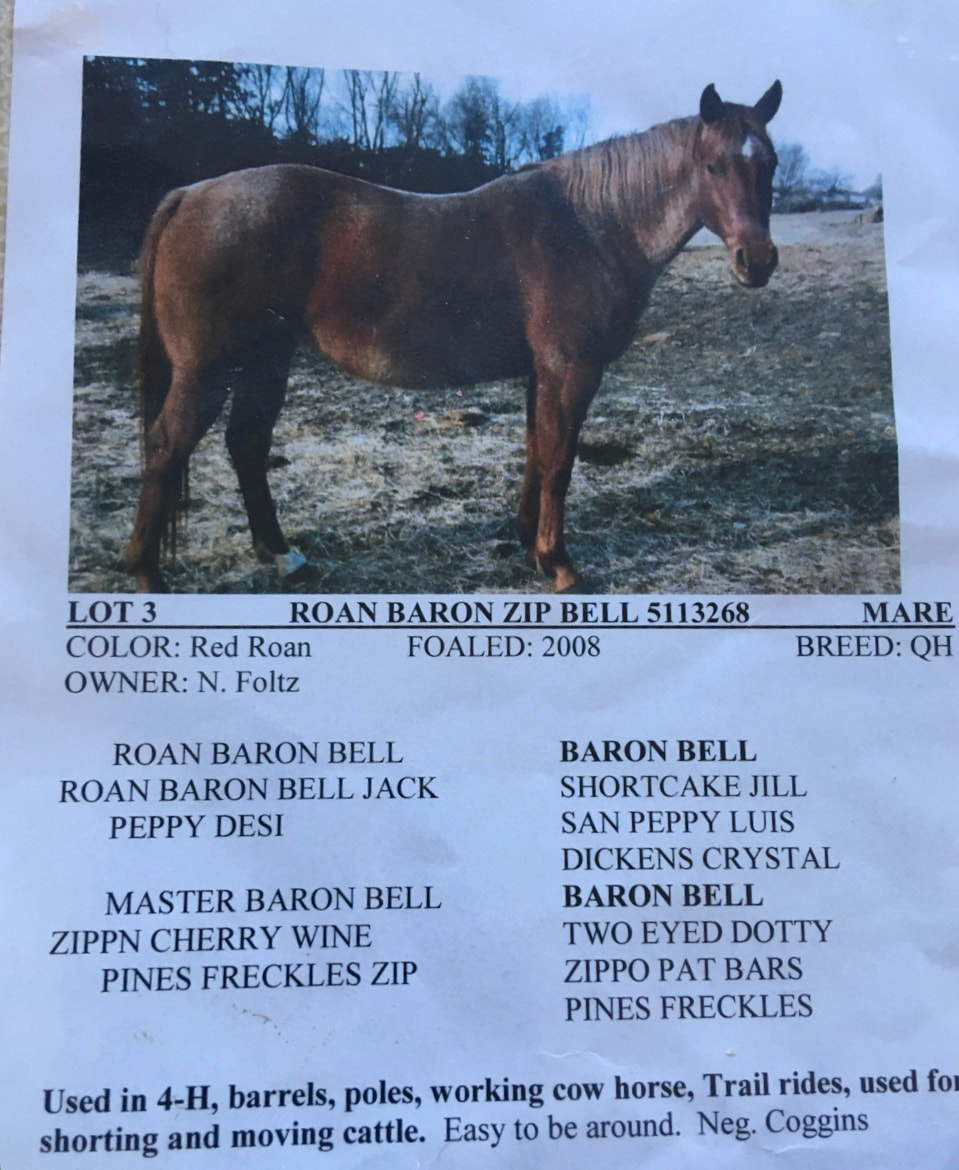 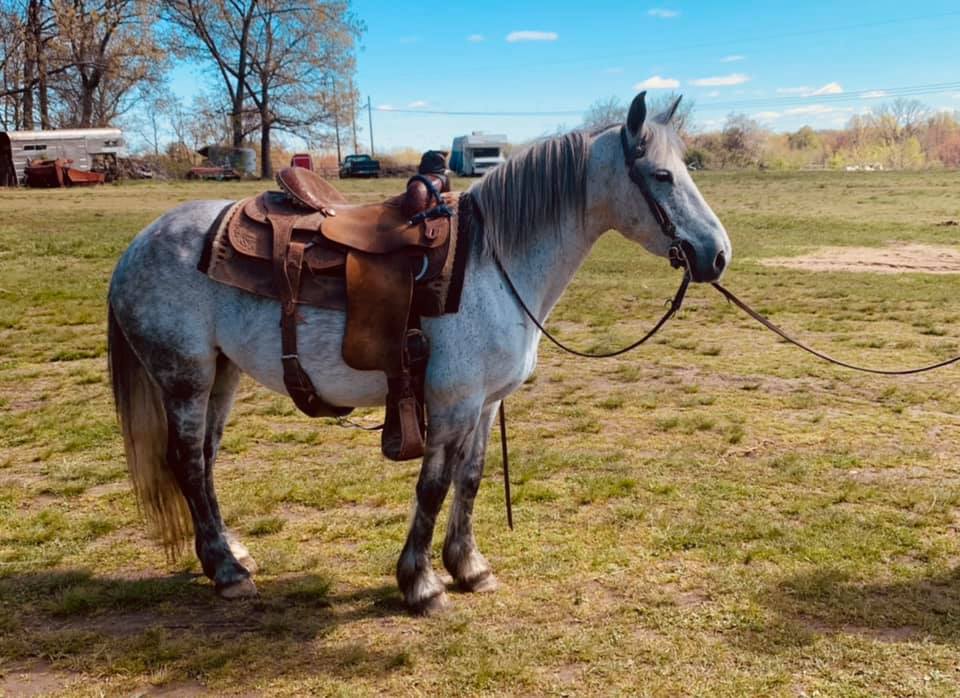